Two droplets. It doesn’t sound intimidating. It actually sounds pretty harmless. Sometimes, however, two droplets is a unit of measure so enormous, so catastrophic, that it has the ability to forever change the course of life.

In June of 2010 my husband was a perfectly healthy 26 year old man. We were living life with our almost 3 year old daughter and our one year old triplets (two boys and girl). Life was as normal as it could be for a family with that sort of dynamic. On another one of our ordinary days, the bathroom sink became clogged. My husband used a widely sold drain cleaner in an attempt to fix the issue. He poured the chemical into a funnel placed in the pipe under the sink and that’s when it happened. Two droplets. The funnel burped and two droplets of the chemical hit the back of his hand. We had no clue at that moment our lives would never be the same.

The chemical began to eat away at the skin. We lived 5 minutes from a local hospital, so I snapped a photo of the ingredients on the bottle and we headed off to the emergency room. The hospital called poison control and proceeded to follow protocol in treating the chemical burn. He ended up having a skin graft performed to cover the wound area which was not much larger than a quarter. Done, right? End of story? Not even close. It was only the beginning.

After a few uneventful months, the grafted area began to ache. It was an ache that he would become all too familiar with moving forward. The ache was followed by redness in the area, which quickly evolved into necrotic (dead) skin and flesh. The wound spread beyond the grafted area and became a bit larger. He was admitted to the hospital and another graft surgery was performed. It didn’t fix the problem. Neither did the next one, or the next one, or the next one.

Without any warning to go on but the familiar ache, the back of his hand would repeatedly die over the course of the next 5 ½ years. There was no apparent reason and no solid diagnosis. Every time, the wound would grow larger. It eventually covered the entire surface of the back of his hand. We saw so many specialists and doctors in our hometown of Milwaukee, WI but we found nobody who could help or make it stop. Eventually I reached out to a specialist at a research hospital within driving distance of home. My thought was a teaching, research facility could provide answers we could not find in our city limits.

We came home to regroup. I spent many long days and nights researching, reading through medical journals and articles, and reaching out to any resource I could find that I thought might lead to some answers. All the while my husband continued to suffer, and the awful “thing” continued to flare up and invade our lives. The kids and I spent our evenings and weekends going back and forth from the hospital, visiting dad and trying to help him feel better while we ourselves were falling apart inside. Nobody understood what was happening, and to this day I don’t know how to answer people’s questions when they ask what is going on and probe for information regarding the plan.

We traveled to some of the best hospitals in the country in search of answers including the Mayo Clinic and the Cleveland Clinic. While the hospitals were incredibly impressive and the doctors and nurses at both locations were very kind to us, they were unable to make a solid diagnosis or provide answers. These places were supposed to be where one goes for answers nobody else can find. We thought for sure we would reach the end game through one of those medical giants and get our lives back. We were wrong again.

To keep a story so long I could create a page count to rival War & Peace short, he ended up having 27 surgeries in total to try and remedy the issue. He had grafts and flaps and even had his hand sewn into his stomach for three weeks. None of it worked. His body has served as harvesting ground for his hand. Both of his upper legs, an upper arm, his groin area, and his abdomen are covered with scars from donor sites. Oddly, those sites have all healed and never experienced the dreaded necrosis. His hand, however, kept relentlessly dying. It got to the point that he was spending as much time in the hospital as he was at home. The flares were getting closer together and more aggressive.

While he felt all of the horrible physical pain that comes along with a part of your body dying over and over, our entire family suffered along with him in other ways. It is so incredibly, heart wrenchingly difficult to watch a person you love writhe in pain while you stand by watching, unable to make it go away. Eventually I became unable to say with honesty or sincerity that it will be okay, or that this too shall pass. We began to feel hopeless. Our kids, now 8, 6, 6, & 6 had spent every bit of their lives they could remember visiting dad in the hospital and being unsure of what each day would bring to our family. They started to look around at their peers and began to realize that our “normal” wasn’t really normal at all. This was a difficult realization for them, and they have grown to join me in the waves of fear and sadness. Watching our children worry and cry for their dad is hard, and while we can guarantee them everlasting love and some delicious ice cream treats, we could never promise them the struggle would end soon.

On December 15, 2015 my husband made the difficult decision to have an amputation performed. It had been suggested by a few doctors in the last couple of years and was considered the heavy end game to the awful journey of trying to save the limb. He decided that he had done everything and couldn’t take it anymore. He decided he was through suffering, and he was through watching his wife and children suffer. It became clear that quality of life with one hand would be superior to the quality of life that came with a dead, diseased, and painful hand. It was time. The hand was removed and a few days later we walked out of the hospital for what we had hoped would be his last inpatient experience. The weeks that followed the amputation were difficult at times, but he made it very clear to everyone he had no regrets. He felt physically better than he had in years, and for the first time in so long we were looking forward with optimism. We were all able to breathe and felt a massive weight lifted off our shoulders. He had lost his hand, but we were taking our lives back! That was the plan anyway.

On February 12, 2016, just shy of 2 months post-amputation, the familiar, awful, life shattering ache returned. Shortly thereafter, so had the mysterious necrosis, spreading across the end of his newly healed stump. That stump represented the fact that he literally gave his right hand in exchange for a better life, and now the end of it wears a taunting badge of the dead flesh we thought had been removed from our lives for good. What a tremendous slap in the face. This “thing” with no face and no name has returned to destroy our lives and our dreams of a normal future without constant pain and suffering.

I sit here today, writing this at my husband’s bedside because I don’t know what else to do. I want to help. I can’t. There is nothing I could possibly say to him to make this better. There is nothing I can do to remove the pain or to provide a solution. Two droplets. That’s all. I don’t know why this is happening, and I don’t know where we go from here. Having visited such prestigious medical facilities to no avail has me at a loss. They don’t know what to do for him. We are at the point that his treatment is the classic definition of insanity; they do the same thing over and over hoping for a different result but it doesn’t work. The antibiotics don’t kill this thing. The pain medications can ease his physical pain but the emotional and mental pains are another story completely. Where do you go when you have lost hope? Where do you go when you feel you have been everywhere? What do you do when you come to the realization that nobody can help you and this thing will continue to rage on in your body indefinitely? I suppose my thought at this point is: I go to the internet. It is 2016, right? This is how things are done and people are reached. If I am to retain any hope this will end, I have to believe there is an elusive medical professional somewhere that has the brilliance, the heart, and the determination to help my husband. There HAS to be a person able to figure this out, to understand what causes this and to make it stop. I have to believe that. It’s all we have to hang our hats on.

I want to make it clear that I did not write this in hopes of a handout. I have a full time job that keeps our mortgage paid and food on our table. We have an (obviously much needed) excellent health care plan. I also did not write this for pity. While I have just laid out all of the sadness in our lives, I need to point out my awareness of our blessings as well. I thank God for them daily. I know there are people with far worse issues. Our four children are healthy, intelligent, kind, phenomenal human beings. We have a network of family and friends that are incredibly loving and supportive. They have not turned their backs on us in times of need; in fact our village has grown larger and stronger. My husband is the pillar of strength. He has shown me, our children, and everyone we know what it means to be strong in the face of adversity. He is brave and he does not often complain about his situation. He keeps a good sense of humor no matter what is happening. He understands how blessed we are and he appreciates all we have that is good. He is an extraordinary father to our kids. In fact, he is the best father I have ever met in my life. I could write another essay completely to discuss how wonderful he is and how he would do anything for anyone without a second thought.

Here are three things I do want:

If you are not well or face similar illness-related adversity in your life, know that we pray for you.

If you can help or have a referral, please email: twodroplets@yahoo.com

If you know us, please keep our names from the public as we do not want unwarranted attention. I will look at every e-mail received and respond accordingly to those we feel are safe and potentially helpful. Thank you so much. 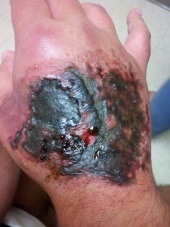